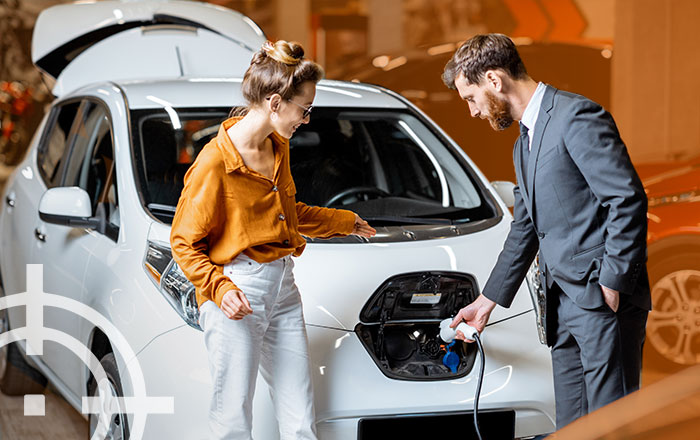 Record low inventory, high consumer demand, and selling vehicles in new digital marketing ways have led to a year of significant changes for auto dealerships across the country.

Tyson Jominy, the vice president of data and analytics for J.D. Power, said he’s never seen a year with so many changes in the automotive industry.

“It’s very exciting,” Jominy said during a recent Facebook Live hosted by Digital Air Strike. “The situation is fantastic right now for retailers and automakers. It’s not the greatest for consumers, but they even have low-interest rates and high trade-in values. Demand is far outpacing sales. Demand and sales have been completely decoupled.”

Here are some of the ways the industry has changed since the pandemic hit in early 2020:

While car buyers would typically drive within 10 miles of their house in the past, the shift is more towards the 10 to 50-mile range. Consumers who are driving 50 miles or more are up 33% from 2019, Jominy said.

“They’re driving farther because inventory is tight, and they’re trying to find the vehicle they want,” he said. “Before they could find something much closer to home. Now they’re searching far and wide.”

Car dealerships need to take advantage of this by advertising to consumers nearby that they can get the cars their customers want to keep them closer to home, Jominy said.

Consumers are paying more for their cars.

Eighty-four percent of car shoppers are paying near or above MSRP (Manufacturer’s Suggested Retail Price), he said.

Automotive brand loyalty is going up.

Industry loyalty increased more than a point since 2020 to 49.5%, according to the J.D. Power 2021 U.S. Automotive Brand Loyalty Study. The premium side is seeing even higher brand loyalty than the mainstream side, he said.

“Subaru, Toyota, and Honda continue to do very well. Subaru and Toyota both had loyalty over 60%,” Jominy said. “We’re seeing some crazy moves from brands like Volvo, Volkswagen, and Mazda, taking 4-6% increase in loyalty in one year alone.”

Consumers are sticking with the same vehicle brand they previously had because they’ve never been more satisfied with their vehicles. Cars are also of higher quality and are lasting longer, he said.

Car shoppers have to make compromises now, especially in color.

“They’re lucky to get the car they found,” he said. “They can’t be picky right now.”

Since it’s become harder to find the car they’re looking for, customers are working with car dealerships now more than ever, Jominy said.

To take advantage of this, car dealers must focus on being the best they can be with their customer experience. Since price isn’t a discussion since car shoppers don’t have much negotiating power right now, he said they’re choosing car dealerships based on their online reputation, including reviews and social media.

We know that the industry was afraid of this group for a long time, but 38% of car sales are now Millennials, while Baby Boomers accounted for 26% of sales over the past month, Jominy said.

“A wide gap has opened up, and it is a permanent change,” he said. “It’s the first generational shift we’ve seen in the auto industry over the past 50 years.”

This change happened during the peak of the coronavirus in April 2020, which is working out well for car dealerships because Covid-19 forced the industry to adopt more digital marketing solutions. With shelter-in-place orders and more car shoppers feeling safer doing their shopping and researching from home, online retailing was the only way dealers could have done business during this time.

“Millennial car buyers will expect a better customer experience. They’ll demand it,” Jominy said. “They don’t want to spend 5-6 hours at the dealership. They’ll do their research online. They expect a more seamless car-buying experience than the older generation.”

Millennial car buyers are the No. 1 buying demographic in 17 of the 27 segments J.D. Power tracks, including everything from trucks to minivans.

“If you want to be successful in this (Millennial car buyers) market, you need to find a way to reach this group,” he said. “My advice is to stay in the market. Stay visible in advertising. Be out there telling consumers to work with you. You can find the cars they want. You’ve already invested in digital marketing; continue down that road. Be willing to work with consumers. Better customer experience will always win.”

Vehicle prices have never been higher, but payments haven’t risen as much.

The September average new car price was over $45,000, while used cars are now over $25,000. But while prices are up, car payments haven’t followed nearly to the same extent. Prices for the year are up 17%, but payments are only up 8%, Jominy said.

“Low-interest rates and higher trade-in values are helping to offset these price gains,” he said. “The bottom line isn’t quite the same as the top line when it comes to payments.”

Good news for people with deep pockets; vehicles above $80,000 have seen a sales growth of 140% vs. 2019, Jominy said. This includes an increase in new Corvettes, Escalades, and Cayennes, he added.

More electric vehicles are on the road.

EVs have now been in the market for over ten years since the Nissan Leaf debuted in December 2010. Since the start of 2020, the number of EVs on the road has increased from 2% of all vehicles to 3%, and the curve is starting to shift higher, he said.

“It’s going up because automakers are offering more electric vehicles, and in segments people want to buy,” said Jominy, crediting the Tesla Model Y and the Ford Mustang Mach E. “Americans don’t want EVs with hatchbacks. I think the Ford F-150 Lightning launch is going to be the pivotal moment for EVs.”

What should car dealerships expect in 2022?

The good news is inventory can’t hurt anymore because it’s already so low, he said.

In April, the sales pace was 18.4 million SAR (Specific Absorption Rate), the fourth-highest the industry has ever seen. That fell to 12.2 million in September, which was lower than in September 2008, the month of the Lehman Brothers collapse that set off the 2008 financial crisis and recession that followed, Jominy said.

“The bad news is we’re not getting a lot of inventory until Q4 of next year,” he said. “We’ve got over 4 million consumers sitting on the sidelines waiting for cars to come in. The production pace will determine what our sales pace is. There’s demand out there in excess of 18 million. It could be the biggest year we’ve ever had if we have the production.”

In 2019, the industry had 17 million car sales, which fell to 14.5 million last year. This year will likely see sales in the mid to upper 15 million. Jominy is hopeful next year will get back into the 16 million mark, which entirely depends on the production.

“Automakers and dealers are making more money on each car. Everyone sees the silver lining. We just wish we had more cars,” he said. “The total dollars consumers are spending in the market is up 20% from 2019. The market is just growing bonkers. That’s creating a lot of profit for automakers to re-invest in EVs and the electrified future.”

To ensure your car dealership is getting the best ROI and has a 5-star online presence with the best digital marketing strategy, request a free Intel Report, including a custom analysis of your online presence.