The State of the Auto Industry in Mid-2021 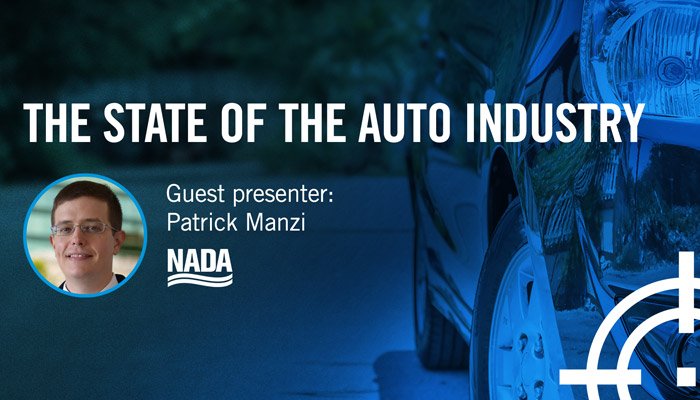 The National Automobile Dealers Association’s (NADA) chief economist Patrick Manzi joined our recent Facebook Live along with Digital Air Strike’s COO Erica Sietsma to discuss the current situation and how all the factors impact dealers and consumers, and what’s next.

“The demand remains strong, but because of the chip shortage, the demand has been higher than the OEMs’ ability to fill lots,” he said. “Hopefully, by September, we will start to see some change there. Long term, we are expecting to get back to a 60-day supply.”

Vehicle inventory is down to just under 1.4 million industrywide, which is down significantly from the 2.6 million inventory level from a year ago. Small cars have the shortest supply at 23 days, followed by crossover utility vehicles at 25 and mid-sized cars at 26, Manzi said.

“Dealers are managing their inbound leads as if they have all the inventory in the world,” she said. “Dealers are showing alternative vehicles, are quick to respond to customers online, and are doing well at advertising the inventory they have coming.”

Dealers are also doing a great job of reaching out to consumers asking for trade-ins to add to their inventory, particularly through bulk text messages. As 91% of Americans have their mobile device within reach 24/7, text messaging with eye-catching images, videos, and GIFs creates another great way to engage with customers. For example, Kia of Alhambra in California was able to get 150 vehicle trade-ins from customers after Digital Air Strike sent out two Power Text messages advertising Kia’s Retail Trade-In Assistance Program.

Average transaction prices are up, with the average new vehicle price hovering around $40,000. Because of the higher prices, fewer OEM incentives, and lower inventory, the used market has never been hotter. Certified pre-owned cars are trending up, with dealers completing the needed repairs on trade-ins to offer CPOs at a premium, Manzi said.

“With a warranty and better financing, a CPO is a great option because you get that peace of mind,” he said. “Consumers can still get in almost a new car and get the warranty too. We only see the potential for CPOs to grow.”

The reduced supply for used cars, including fewer re-possessions, has caused record wholesale prices through June. Manzi expects the used vehicle prices to plateau and stay high until the chip shortage is over, at least for the next several months.

So, what does the second half of 2021 look like for the auto industry? Q3 will still see some supply constraints, but starting in Q4, those inventory levels are expected to rise, Manzi said. NADA expects 16.5 million vehicle sales for the year and should be closer to 17 million sales in 2022, he said. Compared to previous years, the pandemic impacted new light-vehicle sales in 2020, with 14.46 million units sold. Car sales were down 14.7% compared to 2019, according to NADA.

“Once the chip shortage is resolved, I think it will be gangbusters out there, with forecasts of the highest production in years,” Manzi said. “Consumers and fleet buyers will be waiting to buy all these vehicles.”

Meanwhile, smart dealers are maximizing every opportunity, with some dealers having their best months ever. Dealers are pulling in trades, selling used and CPO, and pre-selling everything else, Sietsma said.

“Dealers are not stepping off the gas,” she said. “They are leaning in. Awareness is still a big piece of the market. Dealers must stay present in their community. They need to keep orders coming in and get creative and smart on their digital strategies. Inventory is coming back. Don’t get into a hole now. You’ve got to keep your name out there. You want your customers coming to you first.”