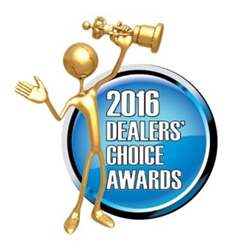 “We are proud to receive this award for our social media, reputation management and lead response solutions and thank the hard-working dealership personnel for recognizing the value we provide and naming us the top partner in this category“, said Alexi Venneri, Digital Air Strike’s Co-founder and CEO.

For the second year in a row, the company was also recently named a finalist for the Red Herring Top 100 Global Award, an award it won in 2015. The award recognizes outstanding entrepreneurs and promising companies around the world. To be considered in the Global category, companies must first win a regional award.  In June, Digital Air Strike won the Red Herring Top 100 North America Award for the second year in a row and is among only three percent of winning companies that have won more than once.

Since 1996, Red Herring has kept tabs on up-and-comers. Red Herring editors were among the first to recognize that companies such as Facebook, Twitter, Google, Yahoo, Skype, Salesforce.com, YouTube, and eBay would change the way we live and work.  Digital Air Strike was one of only two companies serving the trillion-dollar global auto industry named a Red Herring Top 100 Global winner.