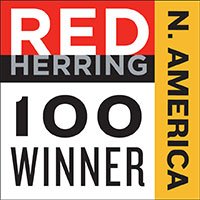 Scottsdale, Ariz., – (June 13, 2016) Winning one of the industry’s most prestigious awards two times in a row is a rare honor, with only three percent of companies receiving it more than once.

“It’s an incredible honor to receive the Red Herring Top 100 North America Award for the second year in a row,” Venneri said. “The recognition is a testament to the innovation of our team and the solutions we provide that help thousands of clients grow and succeed every day.”

The Red Herring 100 Awards are considered one of the technology industry’s most prestigious honors. Digital Air Strike is among only three percent of winning companies that have won more than once.

“In 2016, selecting the top achievers was extremely difficult,” said Alex Vieux, publisher and CEO of Red Herring. “The variety, depth, disruption and traction we saw from the early stage companies to those with a significant scale made it one of the toughest vintages to judge. As one of the winners, Digital Air Strike should be proud of its accomplishment under such strong competition.”

Since 1996, Red Herring has kept tabs on up-and-comers. Red Herring editors were among the first to recognize that companies such as Facebook, Twitter, Google, Yahoo, Skype, Salesforce.com, YouTube, and eBay would change the way we live and work.

A pioneer in digital response, social marketing, and online reputation management, Digital Air Strike has developed industry-specific mobile apps, software and managed service platforms to monitor, improve and manage consumer engagement for thousands of businesses, including six of the largest auto manufacturers, across the United States and Canada.