The demolition had already begun when she found out the construction loan that would pay for the home remodel was cancelled. She had just launched a new business. And, she was expecting a baby.

Oh, and there was a little thing called the recession that was the constant backdrop.

But not only did all of that fail to deter Alexi Venneri, the CEO and co-founder of Digital Air Strike, it set her and her Scottsdale consumer engagement technology company up for near invincibility.

Or at least well-equipped to navigate the challenges of an unforeseen pandemic.

“(I was) pregnant, with a ripped up house, just started a business…,” said Venneri of that time in 2010, which included a week when she had to run to a nearby restaurant to use the restroom. “When you start a business during that craziness, I think it does prepare you.”

Fortunately, her kitchen and kitchen table were functional and served as Digital Air Strike’s original headquarters. She started with 200 clients and didn’t pay herself for the first six months.

At the company’s 18-month anniversary it was profitable and stayed that way over four mergers and acquisitions, having taken on no funding since 2011.

In 2019, DAS earned be tween $30 and $40 million in revenue, Venneri said. Today, it has more than 5,000 clients across the U.S., plus 12 international countries. In addition to its Scottsdale headquarters, there are offices in San Jose and Burbank, California, and Royal Oak, Michigan.

DAS is part of a $5.2 trillion global information technology ecosystem, according to the Computing Technology Industry Association.

“It comes from being scrappy and resilient. When you’ve been pinching pennies for a while, that’s how you run your business,” she said of her company’s success.

For the past 10 years, DAS has developed technology that allows clients to harness the power of social media and other online avenues to clients’ benefit. Services also span features like video, artificial intelligence, automation technology, mobile apps, social media and reputation management and more.

The client base includes seven of the largest automotive manufacturers with the majority of clients in some facet of the auto industry. Venneri said that 39% of car purchases and service transactions in the country are affected by at least one of DAS’ tools.

Clients are in industries with a customer base that tends to do a lot of prepurchase online research and make higher ticket purchases like housing, online college programs and cars.

Not every business was prepared for the impact of COVID-19. But considering its far from ho-hum beginnings, DAS was fairly primed to take it on.

When the pandemic hit and made doing business in-person risky and nearly impossible, DAS’s clients found themselves starting at square one.

Fortunately, Venneri and her evolving business model was several steps ahead. She already had the technology and plans ready to go. Conditions just provided a nudge.

“It was moving this way, but the pandemic expedited this,” she said. “We are always looking at ways to elevate the interaction that can be cumbersome for the business or consumer.”

This technology has helped many auto dealers approach doing business in ways they previously had not, like selling vehicles online, contactless service, e-contracts and even at-home test drives where vehicles are dropped off and picked up with no physical contact or, if desired, interaction. Consumers also can quickly see what vehicles they qualify for right off the bat.

The result is a seamless consumer to business relationship that takes less time and is more transparent, Venneri said.

Other programs like DAS’ Response Path Power Text, a bulk texting technology that gives clients an easy and fast way to reach consumers at home, came together quickly in-house in response to the need for distancing.

“The reality now is that no one wants to meet in person. Businesses have to use this technology. I think it’s changing behaviors, too. Customers will expect they can do more at home,” she said.

For seven years, Jordan Barrett, the digital marketing director of Liberty Automotive Group, has used DAS for assistance with customer survey response, reputation management, social media presence and managing the AI chat box that pops up on the websites.

This would be tedious, confusing and time consuming on the dealer end. Not being tasked with those duties frees up personnel to do what they do best. This, Barrett said, has been crucial, especially in the past few months.

Also, Barrett is better able to understand the benefits of social media ads and various leads that result in sales. These are among the ways DAS has enabled him to help improve business for his employers, past and present.

“I feel like they are an extension of our team. Digital Air Strike comes in, watches our business process and lets me know what they can help us with, which is why they are impactful and they work,” Barrett said.

In the fall of 2009, Venneri was running an ad agency that dealt primarily with car dealerships. The heat of the recession took its toll and for the first time in her adult life, Venneri didn’t have a job.

She kept her date to hit an industry trade show and connected with two other entrepreneurs, who would be her fellow co-founders and investors.

Although it seemed counterintuitive at the time, Venneri recognized that social networks were just starting to take off. She envisioned launching an agency that delved into new ways clients and customers could connect.

locations and used that to spark more responsive interaction with potential customers.

Over the years, the technology and business model evolved and progressed.

When the pandemic hit, DAS reached out to clients, many of whom were panicking. They gave clients new technology packages at no cost and other services to keep them going under the strange new circumstances. This, Venneri said, has created a stronger than ever rapport.

“It lets them know, mentally, that we are in this together,” she said.

But that camaraderie extends beyond work relationships. Contributing to the community is also part of the algorithm.

Supporting projects that benefit animal shelters, at-risk youth, the homeless, single mothers pursuing a college degree and social injustice are part of the company routine and culture. It recently partnered with GoDaddy and the #OpenWeStand campaign to offer free tech tools to businesses.

“Giving back to the community is a luxury we have because we can afford it. It’s so great that when we see a need, we can take action,” she said. “I feel like we are making a difference.” 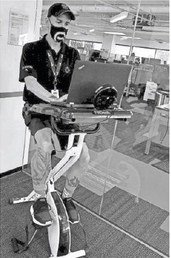